Note: I frequently refer to NG, but I understand, and hold accountable, the two other boys in the video.

Recently, a video made by three teenage boys went viral on YouTube that criticized female hair. I don’t wish to give it more popularity than it already has, but the main name (initials) behind the video is NG. My favorite (9-10 min) video that explains everything wrong with NG’s vid is by TheThirdPew, which features excerpts from NG’s vid.

My fellow feminist friend was in the mood to voice her opinion about NG (at this point, you know who I’m talking about), probably because I’ve been voicing my opinion on oppressive opinions (basically I say they’re the building block to racism and sexism and the problem is the audience might not know any better). No guarantee I’m her inspiration, though.

NG’s misled, female-based army of fans defended the video, but all they had to say were weak arguments. Here is the first tweet (I assume) along with a reply.

(Note to Jennifer: I would’ve criticized their actions, for appearances are merely opinions and should not be the basis for arguments. Criticizing the video holds a solid argument, and I’m sure their video is what made you angry.)

Here is what she said regarding the sudden outburst of fangirls defending NG (and his crew).

Jennifer, you slipped. Generalization. For next time, in case it happens, say something like “obsessive fans.”

What I have to say about the below person’s comments are that they don’t understand celebrities. Celebrities are idols of influence, whether or not they want that power. (WARNING: I may repeat ideas stated by TheThirdPew.) When NG publicly shows outright disgust for peach fuzz, something every girl has unless they already take care of it, it makes girls feel bad because they have this natural thing that NG makes them feel ashamed of. What he doesn’t understand (because he has that prepubescent shadow stache going on) is that waxing hurts and shaving makes the lip hair sharper.

Chances are, he won’t be making out with most of his fan base, so why does it matter to him if most of these girls have lip hair?

Orange is Jennifer’s friend. Black is a fangirl.

Here is a prime example of a weak argument. Instead of staying on point, the fangirl tries a cheap hit by insulting Jennifer’s looks. Obviously, this is a misogynistic strike because you’re avoiding the point by saying her looks negate the validity of her perspective. But here’s another take on it.
Fangirl, if you try to win an argument by insulting a girl’s looks, you exemplify why this video is wrong. The group you represent argues “it’s an opinion. He’s not telling you to change”. By you expressing your opinion, calling her ugly, you understand how harmful words regarding appearance can be. You aren’t telling Jennifer to change, but you hope to hurt her by expressing your opinion on how she looks.

As for the friend of Jennifer, the little chit chat fighting really had no substance, it was a battle of pride. However, that’s where the argument was going with this particular fangirl, so I understand why her friend made those statements. 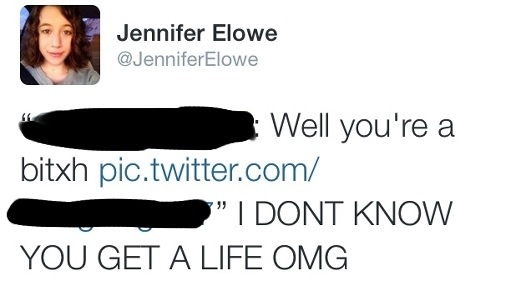 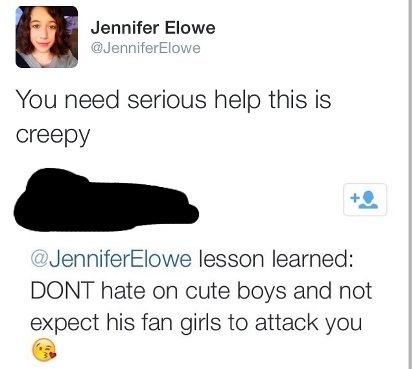 Bottom line is thank you, Jennifer, for standing up against crazed fangirls (and boys, if there were any) to defend the self-esteem of girls affected by the video.